Therapy is a lot like school: there is homework. But, it’s life homework. Presumably the kind of thing that makes us better versions of who we already are. I don’t know. I haven’t decided if there is truth to that but I’m doing the homework anyway. Because I’ve always been a tenacious student and I’ll be damned if I fail in the classroom of life (and therapy).

This week’s homework: mindfulness. Being present in the present. Noticing things for what they are, not how my messed up brain perceives them. In theory this is easy enough. But in practice, it’s never quite so easy to stay in the here and now when there is some pressing memory from every. damn. month of the year, of some year. My brain clings to the past like well-adjusted children cling to their good-enough mother’s. But even that child will eventually learn to let go. I never learned that lesson.

So here I am, 29, drowning in my ridiculous past. Ticking off traumas on my fingers like the well-adjusted child learning basic math. We both hide our hands under the table and pretend we can do it all on our own. But that’s a lie, just a facade. Because we both rely on the counting. He needs his fingers to mark the space between numbers and I need mine to mark the time between traumas. I need mine to tell me who I am. I can’t let go. I can’t quit. I can’t be in the present because who am I without those memories? Who am I?

Deep down I know I’m not January. I’m not rape on New Years or a due date for a wanted child who never took her first breath. Or another rape, by another person, in another year. But still in January. 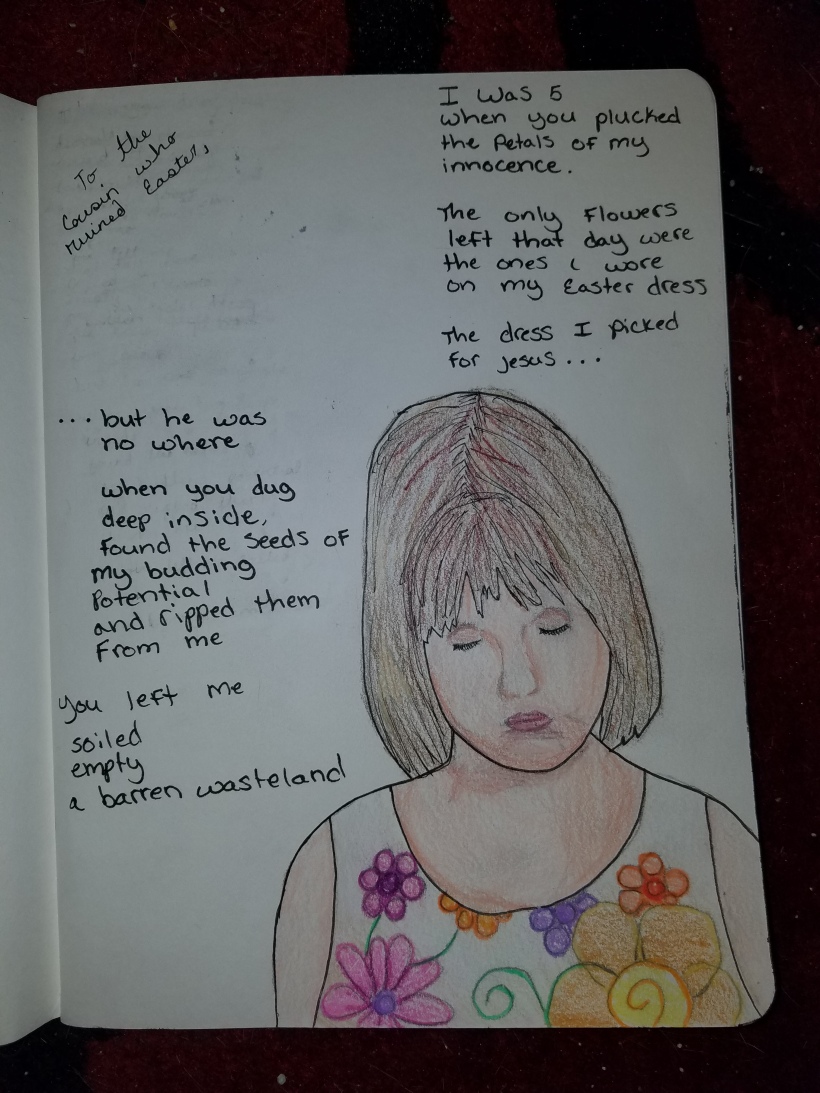 I’m not the first time I got pregnant by a man 16 years older than me.  I’m not the loss of another baby, a different baby, years later. The sweet, innocent baby of a monster. I’m not my broken body. I’m not my hollowed out womb.

I’m not May. I am not the friend who drowned on our senior trip to the lake. I’m not the empty seat at our graduation. I’m not the anguished wails of a mother who had to learn the hard way the weight of that kind of loss. I’m not the stage I walked across for graduation, completely ignorant of the life growing inside me and the grief she would cause.  I’m not that naive teenager being left by the man I thought I loved. I not that girl being abandoned because of two lines on a pregnancy test.

I am not June. I’m not the summer months at the neighbor’s house, earning time with his step-daughter by paying with the currency of my body. I am not the sleepover with the Pizza man’s daughter, the pantiless night that he slipped into the room and slipped himself beneath our nightgowns. I’m not the silence that followed. I’m not the woman who locked herself in a closet years later, with yet another pregnancy test; the test in one hand, a razor in the other. I’m not the woman who swore she wouldn’t have the baby of an abuser.

I’m not August. The month I was born with the chord around my neck. Even my newborn self knew better than to brave this world. I’m not my first miscarriage or my third miscarriage. I’m not the universe reminding me in the month of my birth that my body is a harbinger of death.

I’m not September. I’m not the ex boyfriend who died, run off the road by an 18-wheeler. I’m not the friend from high school who died overseas when his vehicle ran over an IED. I’m not the just married, terrified young woman sitting in the gymnasium of her old high school, mourning the loss of that friend while worrying for her deployed husband.

I’m not October. I’m not the month my divorce was finalized. I’m not the due date of that second baby, the baby of my rapist.

I’m not November. I’m not the month my cousin hung himself in the garage while his 3 month old daughter slept in the room next door. I’m not the phone call telling me he was dead. I’m not my mother telling me how selfish suicide is while looking at his pale body and bruised neck.

I’m not all the bad things that have happened to me but still they haunt me. How can I tell my therapist that I failed at the homework I was assigned because I couldn’t pull my head out of the calendars of my past? How can I find the woman I am today, February 18, 2018? How can I know what it really means to be present when I’ve spent my whole life running from my own presence?

12 thoughts on “A Lifetime of Running from My Own Presence”