Have you done one of those fancy DNA + health kits from places like ancestry.com and 23andme.com? I have and let me tell you, it makes me want to Thwart my genetics.

I was lucky enough to get the health kit free from 23andme by signing up for a research study on bipolar and depression. The results of the ancestry portion were pretty much exactly what I expected. If not a little boring even.

A whole lot of European. I’m okay with that. I even got some cool results when it comes to physical traits like muscle composition:

The kicker for me though is when it comes to the genetic variants that have an impact on my brain. Despite having a plethora of mental illnesses, I quite like my brain. I’m creative and good at making weird connections that other people tend to miss. So, the following results were a little disheartening: 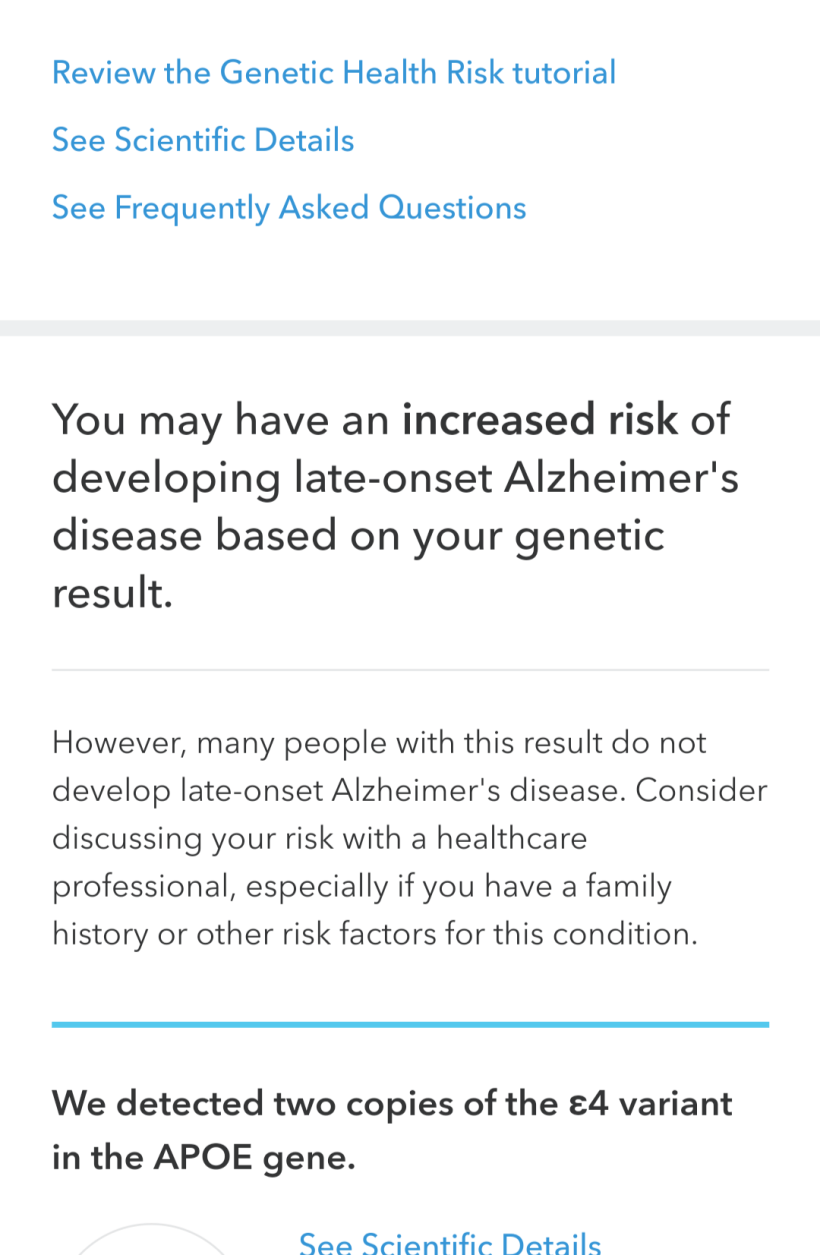 Basically this means my chance of getting Alzheimers is 60% greater than that of the general population. As much as I hoped not to have those variants they didn’t really come as a shock since my grandma has it and her mother and sister had it, so it is something the women in my family tend to inherit. Despite that, I’m not hopeless about my prognosis. I do so many things daily that are so good for the brain. I create art, I read, I meditate, I solve puzzles, I play musical instruments, I study languages, etc. All things proven to lower one’s risk of having Alzheimers in the future. In addition to those things, there is a study that suggests the more education a person has, the lower their chance is as well. What I’m trying to say here is that despite my propensity for worry, I’m actually doing pretty well. I know that I am naturally going all that I can in the present moment, so what happens in the future will happen.

Now, to other aspects of the brain. Since this tends to be a more mental health leaning blog you might be curious if I found anything out about a genetic predisposition toward certain mental illnesses. On that front, 23andme doesn’t deliver, so I used my raw file to do some more research on my own. This is what I found:

I will be honest, when it comes to deciphering this I am a little lost. Perhaps some of you would have better luck. But, what it looks like to me, is that I have a moderate predisposition based on genetic studies which suggest that bipolar disorder can be inheritable. Unfortunately, there aren’t many studies on the genetic link for other mental illnesses so I had no luck there. I did find a whole host of other illnesses I’m carrying genetic variants for which say they’re likely to be pathogenic to my offspring should I ever reproduce. But, fortunately, none appear to be active within me… yet, anyway.

I’m not sure if you can tell but genetics fascinates me. I could nerd out to chromosomes for hours. In fact, I did. I found out that I’m more likely to get colorectal cancer. I have the variants for Parkinsons. I am less likely to feel the effects of caffeine. I am more likely to become addicted to alcohol (though luckily it makes me sick). I have a high tolerance for pain medications. I am supposed to be highly susceptible to anti-depressants; however, I think whoever linked those variants needs to redo their study. So many fascinating findings, all possible because I got my genome as a raw file!

Has anyone else done this study? Any other genetics nerds here?

10 thoughts on “An Attack on Genetics”